Posted by Little Monster on Sunday, 18 November 2018 in Uncategorized 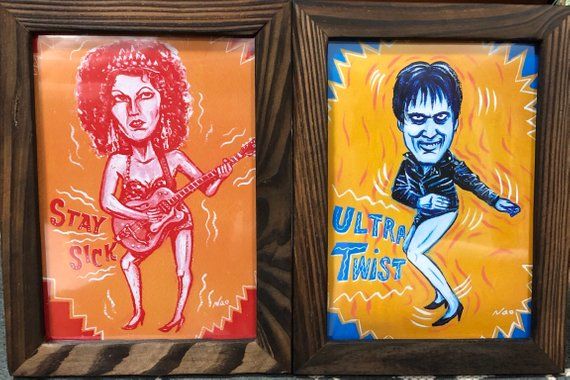 Naoya Kawakami is one of the coolest underground artists and musicians from Japan. He plays in the band BOBBY’S BAR and makes amazing paintings about monsters and pop culture. We interviewed Nao and chatted a little about toys, monsters, rock n roll and other fun stuff. Enjoy it!

Little Monster: You describe your band’s music as Voodoo spook-a-billy. What that means to you?

Naoya Kawakami: To me, Spook-a-billy is a mixture of spooky sound with rockabilly. I’ve always been a fan of psychobilly, but it kinda doesn’t really match my style; I always figured “spookiness” suited me better than “psychosis.”

Little Monster: What can we expect if we go to a Bobby’s bar live show?

Naoya Kawakami: Nowadays we less psychobilly-influenced stuff and more surf instrumental kinds of tunes, so it’s a little different than the “wreckin’” sound you get with psychobilly. Still, we do our best to play music that calls out and awakens the primitive mind, that little Neanderthal that lives in each of us and a space where people can just enjoy themselves and the music.

Little Monster: What’s the first record that you got as a child?

Naoya Kawakami: If it’s a record we’re talking about, my first one would be KISS’ first album. If we’re counting CDs, it would be some Japanese idol’s single.

Little Monster: Image is very important for Japanese bands. What’s the best image (or gimmick) that you ever saw in a rock n roll band?

Naoya Kawakami: Those would have to be: The Fly and His One Man Garbage: a guy in a fly mask that plays a one-man band with a Cramps-like sound; Hat Trickers: a punk band that dress in A Clockwork Orange/droog style and combine that with horror makeup; Theee Bat: a trash garage band that wear English police bobby hats and paint their eye sockets black; Los Rizlaz: a late ‘50s/early ‘60s sounding rock and roll band that wear luchador masks and dress like mariachis. The list goes on and on, there are tons of other cool bands.

Little Monster: We also love your paintings. What inspires you as a painter?

Naoya Kawakami: I get a lot of inspiration and play with ideas from music and movies I like, old toys, stuff like that. I also love Ed Roth, Big Eyes art, old advertisements, movie posters, all that stuff inspires me.

Little Monster: What did you used to draw when you were little?

Naoya Kawakami: I used to draw characters from my favorite manga (Japanese comics), but it was just scribbles. I’d sometimes come up with my own designs for Gundams (famous Japanese big robot cartoon).

Naoya Kawakami: Gegege No Kitaro and Lupin The Third for Japanese cartoons. Western ones? Stop The Pigeon, Scooby-Doo, Josie And The Pussycats. Oh yeah, and Spider-Man.

Little Monster: What was your favorite toy as a child? Do you still have it?

Naoya Kawakami: It was a Mini 4WD car toy. I don’t have it anymore. Also, I had a rubber Kinnikuman (character from a manga about a wrestler from outer space).

Naoya Kawakami: I do sometimes, but I’m not what you’d really call a collector. I have lots of figures of monsters, but I guess recently I’ve been getting into cavemen, too.

Little Monster: Tokyo is like the collector’s paradise. What do you collect?

Naoya Kawakami: What I do collect are tiki mugs. I get them at flea markets, antique markets, used clothing stores, variety shops, places like that. If it’s something that’s hard to get a hold of in Japan, sometimes I’ll buy something from eBay or Etsy.

Little Monster: Is it true that Japanese people usually believe in ghosts? Have you ever seen one?

Naoya Kawakami: Hmm, I wonder. I’d say that there are probably a lot of people with a kind of “dormant” belief in ghosts, but most people nowadays would probably fall into the category of not believing they exist seeing as how science has basically disproven them. I’ve never seen one myself, but I would like to someday.

Little Monster: What legend scared you the most when you were little?

Naoya Kawakami: Maniac killers. I remember this one time I went camping with my family, and my dad started telling me these tall tales about how there was a killer on the loose roaming around the mountain near where we were staying, all after it was pitch black out. Then, later I had to go to the bathroom and I thought I was gonna have a heart attack!

Naoya Kawakami: That would be King Kong. When I was a kid, it would have been Daimajin (a monster from an old‘60s Japanese Tokusatsu movie).

Little Monster: There is a spanish Kaiju called Jocántaro? Do you know him? He lives in Torremolinos.

Naoya Kawakami: I did not know that. I just looked it up and the thing has got the look and feel of a Tokusatsu kaiju, doesn’t it? Man, I gotta check this out. Hopefully I’ll get the chance to see the movie one day.

Little Monster: Tell me something crazy that you used to think when you were a kid. For example, I used to think that each tv set did broadcasts different stuff.

Naoya Kawakami: I guess that would have to be the misguided idea that, one day, without working for it or anything like that, someday some kind of super power would burst forth from within me. Back then there were a lot of manga for boys dealing with people turning into super heroes, making huge displays of power and strength, so I’m guessing it was reading those that made me think that way.

Oh my goodness, that thing about each TV having different shows? Good gracious, that would be a lot of programming! (laughs) I used to think that the liver spots on President Gorbachev’s head were a map of the world.

Check out Nao’s works at: