Posted by Little Monster on Wednesday, 19 October 2016 in Uncategorized 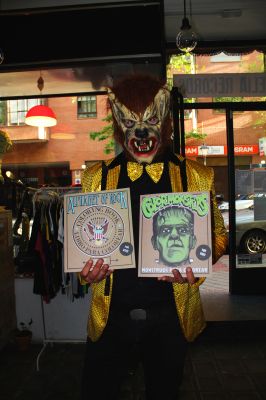 We were lucky enough to have HOMBRE LOBO INTERNACIONAL playing at the LITTLE MONSTER books release party. Since then, his LP “Early recordings” hasn’t stopped spinning on our record player. We could do nothing but talk with him to know how is a wolfman’s life on the road.

LITTLE MONSTER: How about your European tour? We heard that you had to scape from an angry crowd armed with burning torches.

HOMBRE LOBO: The tour was great! It was my second European tour. The first one was in 2015 and the next year I will do it again. Shows went great as the promoters are more like charming monsters that love my rock n’ roll show than plain humans. There are also humans that can’t stand a wolfman running free around Europe, and would run after me with fire torchs, but they never hunt me down, hahaha!!

LITTLE MONSTER: Sometimes rock n’ roll scene can be very conservative. Have you ever felt discriminated because of your wolfman condition?

HOMBRE LOBO: Rock n’ roll scene understands that supernatural is part of rock n’ roll, so I have always felt good about it.

LITTLE MONSTER: What are your backstage requests? Does a wolfman demands anything special?

HOMBRE LOBO: Unlike other monsters, I reflect in mirrors and I like to dress up for the occasion. I don’t need anything special, but I love beer.

LITTLE MONSTER: Tell us about your creative process, do you transform into a wolfman to write music?

HOMBRE LOBO: Yes I do. I write my best songs that way.

LITTLE MONSTER: How did your parents react when you told them that you wanted to play rock n’ roll?

HOMBRE LOBO: They reacted well, because today it’s easier for a wolfman to find a job in show business than in other professional area. So they respect that.

LITTLE MONSTER: It was always your idea to play alone? Did you ever think about forming a band with humans or with other monsters?

HOMBRE LOBO: I have always been a lonesome wolfman, but sometimes I play with other monsters just for fun.

HOMBRE LOBO: I like them all. I enjoyed their movies a lot. I can’t choose just one!

LITLLE MONSTER: “The Early Recordings” is the best record of a one wolfman band that we ever listened. Is it available anywhere?

HOMBRE LOBO: It’s almost sold out, only a few copies left, so I sell them at my shows.

LITTLE MONSTER: Any message for the little monsters?

HOMBRE LOBO: Be happy, no matter what kind of monster you are!!! AAAAAAAUUUUUUUUUUUUUUUUH!!!