Posted by Little Monster on Tuesday, 07 February 2017 in Uncategorized 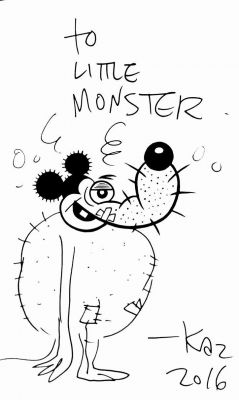 Kaz is one of the minds behind “SpongeBob SquarePants” and the creator of the classic comic strip “Underworld”. He’s also a funny guy with a lot of crazy stories to tell. And he was generous enough to share a few of them with us. Enjoy.

KAZ: I don’t have children, but I love playing with kids. It doesn’t take me very long to regress back to a 6-year-old. I’m very aware that a middle aged adult male playing with children can be creepy so it doesn’t happen as often these days. When I was a teenager and my youngest brother Thomas was 6 of 7, he would try to impress me by drawing homemade comic books. He would hand them to me and demand I read them aloud. And when I did, he would fall all over the floor laughing his head off.

LITTLE MONSTER: In cartoons, are there any joke that always works with children?

KAZ: Yes, when a character bumps his head or falls down. It’s probably the earliest feeling of embarrassment for children. And farting. Farting always gets laughs. But fart jokes are looked down upon by adults who consider themselves sophisticated.

KAZ: There have been so many that I’ve loved and have been inspired by. But right now I’d have to say AMY AND JORDAN by Mark Beyer. I first saw his comics while I was in art school and I connected right away with how over the top dark his writing was. It was so dark that I found it funny. His character and page design really impressed me. I believe it was the tension between the primitive and the sophisticated and the fact that it looked like a humor comic but was filled with personal psychological horror.

LITTLE MONSTER: Did you order something from a comic book ad when you were a kid?

KAZ: Yes, I ordered many things. There were ads for toy soldiers that when they arrived were the size of a booger. I sent away for a 7 foot Frankenstein to scare my little brother but it turned out to be just a badly printed poster. I sent away for various novelties and magic tricks. I joined cartoon fan clubs all the time. I loved getting things in the mail even though most of the things were stupid. I was just amused. I always wanted to send away for a live monkey I saw advertised in comic books until I met a kid who owned a little squirrel monkey that was the nastiest animal I ever seen. All it wanted to do was bite you and tear your face off. Obviously it was a wild animal and didn’t belong in a suburban house in New Jersey.

LITTLE MONSTER: What was your favorite prank toy?

KAZ: I had a magic trick where I was able to move a colored cube up and down a string and make it stop along the string at will. When others tried it they couldn’t get it to stop. It drove my younger brother, Vincent crazy. He would get so frustrated and upset and I found that so funny. Later I got a ventriloquist puppet and my youngest brother, Thomas (maybe four years old at the time) actually thought it was alive and would try to smash and murder it whenever I made it talk. He eventually ripped the puppet’s mouth off. I found that so funny.

Of course I love this subject so I’ll give you two more stories. As a teenager, my friends and I would hang out in Rahway Cemetery. It was an old colonial graveyard with skull and crossbones on the headstones. It looked like the cemetery in the Sleepy Hollow Headless Horseman story. There was a small tomb built into a hill that had a pipe at the top (to let out the musty air inside). If you had someone stand in front of the locked and chained tomb door where they couldn’t see the top of the hill, and talked into the pipe, it sounded like there was zombie inside. I scared the sh¡t out of a bunch of friends when I discovered that.

One day while in High School I had a date with a girl and while walking to her house I noticed a metal pipe sticking out of an old brick wall. (Now you see why I draw a lot of plumbing in my comics.) I also noticed a glove on the ground. So I put the glove on the pipe so it looked like a hand sticking out of the wall. I picked up my date, and knowing that we would pass that wall on the way to the movies, I made up an urban legend about a guy who loved shaking hands so much that when he died he had his body bricked up in a wall with his hand sticking out so that he could shake hands with people while he was dead. Of course, she refused to believe the story so I timed it just right to say, “and you can shake hands with him right now” in front of the gloved pipe. She got scared and almost didn’t go to the movies with me. I had to calm her down and tell her it was just a joke. Not the best way to start a date. But funny.

LITTLE MONSTER: Do you remember a cool costume that you made when you were a kid?

KAZ: I’m amazed that I actually got away with being a black hobo for Halloween when I was 9 or ten years old. I remember wearing a pillow for a fat stomach and knocking into other kids with it. Just a few years ago I made a costume based on cartoon character I invented called Superbilly. A combination superhero/hillbilly.

LITTLE MONSTER: Do you believe in ghosts?

KAZ: No. But that doesn’t mean that I can’t scare myself thinking about it. My whole family has claimed to see a ghost at various times in their lives. I never did. As a teenager, my friends and I would break into abandoned houses and pretend to be ghost hunters. But I was more afraid of the cops catching us than ghosts.

LITTLE MONSTER: Could you recommend us a classic cartoon?

KAZ: You probably already know all the good ones. But see if you can find HOT-TOE MOLLIE (1930) by Romer Grey Pictures starring Binko the Bear Cub. This is the only surviving cartoon from a studio that only made two cartoons. It’s pretty wacky when the scenes shift to a Mexican Cantina.

LITTLE MONSTER: Tell me something crazy that you used to think when you were a kid.

KAZ: When I was a kid I didn’t understand the concept of film or videotape on TV. I watched a lot of reruns and thought the actors were putting on the same story again live. I would watch very close to see if the actors did or said something different from the last time I saw that story. But they never did. They played it exactly the same way down to every move and gesture. Man, they’re good I’d think.