Posted by Little Monster on Monday, 20 November 2017 in Uncategorized 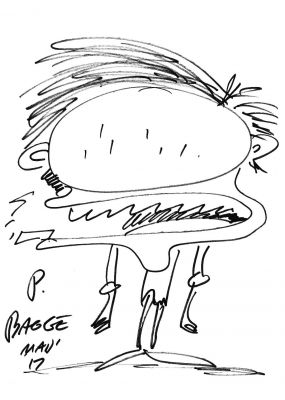 Everybody knows PETER BAGGE as the creator of HATE and the master of underground comics, but he also has a few comics for all ages like Yeah!, The Megalomaniacal Spider-man, The Simpsons comics or the Monster comics that he’s making for Creepy. We were lucky enough to meet him and ask him a few questions about all that and other neat stuff.

LITTLE MONSTER: We enjoy the monster comics that you make for Creepy. Were you a fan of any monster series when you were little?

PETER BAGGE: I liked FUNNY monster comics, like PLOP! and Milton the Monster. I never cared much for real horror. I scare too easily!

PETER BAGGE: When I was working for them they were obsessed with the politician Condoleeza Rise, which I found very funny.

LITTLE MONSTER: Do you remember any cool costumes that you made when you were little?

PETER BAGGE: Hmmm. No, sadly. I wasn't a very imaginative costume maker. I would just go as a "bum" or buy some cheap skeleton costume.

LITTLE MONSTER: You have made comics for Spiderman, Hulk, the Simpsons… is there any character left that you’d like to work on? And is there anything that you would never do?

PETER BAGGE: I'd satirize any character if the pay is good! I was all set to do one on Ironman, but that never came about.

LITTLE MONSTER: Did you ever order something from a comic book ad?

PETER BAGGE: No, and I wish I had! I always assumed those ads where hoaxes, but as an adult I met friends who did order from them and had all that stuff. I was particularly envious of the life-sized Frankenstein poster that Jack Davis drew.

LITTLE MONSTER: What’s the story behind Murry Wilson, the animation series that you made with Dana Gould?

PETER BAGGE: A production company asked us to team up and create a cartoon show. We both had just watched a documentary about the Beach Boys that we loved, mainly due to the portrayal of Murry Wilson. So that's what inspired us!

LITTLE MONSTER: We have the record “Peter Bagge's Rockin', Poppin' Favorites!” a compilation where you include a song by the Spice Girls. What’s your most unpopular opinion about music?

PETER BAGGE: I love cheezey singing groups from the 1950s like the HiLos and the Maguire Sisters.

LITTLE MONSTER: What do you think about this new wave of cartoons for kids like “Adventure Time”, “Regular show” or “Uncle Grandpa”?

PETER BAGGE: I like Adventure Time, but I haven't watched too many other new cartoons. I don't have a kid at home anymore, so we no longer get cable TV!

LITTLE MONSTER: After which season do you think The Simpsons should've ended?

PETER BAGGE: I haven't watched it in a long while, so I couldn't say. Not that I dislike the show. I just don’t watch it.

LITTLE MONSTER: Did you use to pull pranks when you were little?

PETER BAGGE: I made a prank phone call once as a kid. My "victim" figured out it was me immediately. I realized then that I wasn't much of a prankster.