Posted by Little Monster on Tuesday, 27 March 2018 in Uncategorized 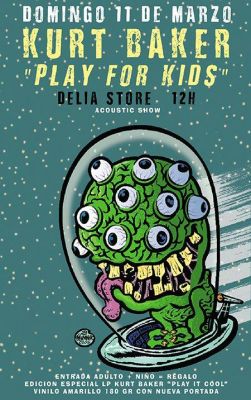 A few days ago Kurt Baker played a special show for kids as part of the Ghost Highway Recordings 10th anniversary celebration. The show was packed and we had a lot of fun.

We interviewed Kurt and chatted a little about kids, rock ‘n roll and gummy bears!

LITTLE MONSTER: What do you like the most about playing for kids?

KURT BAKER: It's always great to play for kids because they love having fun! I like to think that these shows will leave a nice impression on them and from their interest in music grows. Perhaps seeing one of my shows will influence them to pick up a guitar and start a rock n' roll band when they are a little older. Rock N Roll has no age limits, it's for everybody and that's why it's so important to play these fun family-friendly shows that folks of all generations can enjoy.

LITTLE MONSTER: Did your parents take you to any concerts when you were little?

KURT BAKER: Well, growing up in the United States, we didn't have very many options to go see Rock N Roll shows when we were little. I did go to see Children's music performers like a local legend of my state of Maine named Rick Charette. I also remember seeing a folk band called Schooner Fare who had a song called "Skuttlebut" which was a lot of fun. My Mom used to take me to see the Symphony Orchestra play when I was young. At the time I thought it was kind of boring, but now i'm really happy to see those classical music concerts as a kid because it really opened my horizons to all kinds of music at such a young age. The first real ROCK concert I saw was Weird Al Yankovich... that was at a big venue with big lights and it was loud! That was so fun. From there, around the age of 13 or 14 I found out that there was a great all ages punk rock scene in my town, which we were lucky to have.. So I started going to shows all the time once I was a teenager.

KURT BAKER: The first record I got when I was a kid was a tape of "Rubber Soul" by the Beatles that my mom bought for me. It's still one of my favorite records of all time.

LITTLE MONSTER: And the first song that you learned to play?

KURT BAKER: I started out playing bass, not guitar, so I started to learn how to play by playing along with my records. But the first songs I started to play were actually original songs! I had a little family band with my cousins when I was a young kid called The Bobbers. We wrote a few funny songs like "Flying Guitars" and then a ballad called "Missing You". I basically stood around and played the tambourine but it was so cool! My first band called Drain played original songs too.. instead of trying to learn other bands songs, we didn't really know how to play that well so we just decided to make up our own noise. I think the first records I started to play along with and learn were records like "Dookie" by Green Day and the "Blue" Weezer album.

LITTLE MONSTER: What’s your favorite song from a cartoon series?

KURT BAKER: I grew up watching cartoons from the American television network Nickelodeon, so theme songs from "Rocko's Modern Life" and "Ren & Stimpy" were my favorites. Actually the theme song from "Rocko's Modern Life" features two of the singers from the B-52's, a band I would later come to love. Also the "Ren & Stimpy" song is very rock n' roll.. almost like the opening theme of the great Spanish Radio Show "El Sotano" on Radio 3!

LITTLE MONSTER: Now you live in Spain. Do you miss anything like cereals, Twinkies or some kind of candy?

KURT BAKER: I was never a really big fan of cereals, I know it sounds crazy. Actually my favorite candy, and it's always been, is Haribo Gummy Bears. Luckily, here in Spain there are tons of different Haribo gummy varieties.. so I still eat them a lot!

LITTLE MONSTER: Have you discovered any good one here?

KURT BAKER: Anything with Nocilla! I love that stuff. Nutella too.. Kinder Bueno!

LITTLE MONSTER: You have a song with Dan Vapid.  What do you think about his children’s records? Would you like to make one?

KURT BAKER: Dan is a wonderful guy and a great songwriter. His Kids records are great. Also Kepi from the Groovie Ghoulies also made a fun kids record. I would definitely love to do something like that someday. I would probably write at least 5 songs about Haribo! haha!

LITTLE MONSTER: You shared stage with another cool musician at the show. Could you tell us a little about that?

KURT BAKER: When I moved to Madrid four years ago, I started teaching guitar lessons. One of my first students was Guille, and I've been teaching him since. He's an incredible performer and guitar player for his young age. So much talent and we always have good classes. I invited him to play a song with me at the last show and he loved the idea, so he picked the song "It's Cold Outside". It was one of my favorite moments performing on stage this year!

KURT BAKER: I grew up without any brothers or sisters, so I had a pretty big imagination to keep myself entertained. I knew from an early age that I wanted to be a musician. I think I was about 5 or 6 and I convinced some friends of mine to perform as the Beatles in the School Talent show. We decided to lip-sync and perform "Can't Buy Me Love". We watched the "Hard Days Night" movie to learn all the moves and how the Beatles acted on stage. We got some small guitars and the drummer dad made a drum set out of a beer brewing kit. When it was time to perform the song at the talent show we were all so nervous but it was so exciting! To be on stage, with the lights shining in your eyes, and seeing all the kids and parents in the crowd.. it was almost like the real thing! From that moment on, I knew I had to be a musician! It was a very important moment in my life. I'm still friends with the guys that performed on stage with me that night. The thing that is crazy is that I guess that we were so young that most of our peers didn't even know who the Beatles were, but they were screaming and yelling during our performance like a real Beatles concert... and of course, the parents at the talent show really enjoyed it too! haha!

The Kurt Baker Combo will be releasing a new record called "Let's Go Wild!" on May 18th on Wicked Cool Records.

These are their upcoming tour dates in Spain: